Miles Davis is one of the most iconic figures of Jazz history. His biography is one of complex evolution and artistic persistance.  In many ways jazz is often far removed from the appreciation of younger generations and the magic of its expansion of sound and cultural impact are hence too frequently lost. This exhibition takes on the form of the comic book in order to narrate the life and times of Davis and the impulses behind some of his compositions which have gone on to become jazz standards. Lucio Ruvidotti transformed a love for jazz into a comic book that invites the viewer to an intimate look at this artist and celebrates the impact that he has had on the world of music. These works engage an audience that spans generations bringing this figure to the forefront, as Ruvidotti explains himself:

“I tried to tell story of this figure, the prince of darkness, the great artist, taking advantage of some episodes of his exuberant exaggerated life. But above all the goal was to show, through the language of comics, his music, incredibly evolved from the forties to the nineties.”

The comic strip released in 2018 by Edizioni BD tells the story through eight chapters entitled with the names of some of his most important compositions. Each part of the book is also distinguished by a different use of the color and composition of the table. Alongside the original drawings made by the artist, the exhibition shows a series of cartoon prints, accompanied by the music of Miles Davis that pervades the Emeroteca delle Murate room.

Olivier is known for large-scale installations which provoke a disruption of public and private spaces. Familiar forms, altered in function and medium, create uncanny meditations on stagnancy, division and the weight of materiality. Her installations explore the poetics of space and the role of the viewers in shaping their own experience and engagement.

Lucio Ruvidotti, is a young author active in the world of self-productions and on the weekly page 99, his recent book portrays “the Prince of Darkness” in a bio-graphic novel full of rhythm, colors and experimentation that gives the a Icon, natural evolution of the BD necklace Rock. 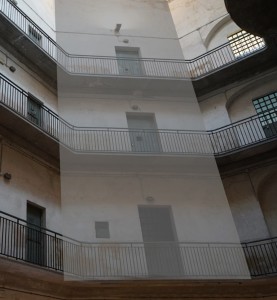 Curated by BHMF With the partnership of Le Murate. Progetti Arte Contemporanea In collaboration with: Boomker Sound Studios Syracuse University Florence SRISA Vivaio Il Giardiniere Antonella Bundu Chris Norcross And we can no longer breathe And we can no longer see But, in the escape compagno In the fear, compagno Like in the fight, compagno I will be forever by your side Collettivo Victor Jara, Le Murate These were the words written and sung by the musical collective Victor Jara days after the 1974 revolt at le Murate jails. Protest against unfit living conditions and oppressive forces are frequent in sites which separate, either willingly or by force, social groups from the world that surrounds them.  The socio-spiritual nature of what is just  and human worth is at the root of contemplation in isolation. These feelings originated from the artist’s encounter with Le Murate. Progetti Arte Contemporanea, they led the project. For the occasion of the fourth edition of Black History Month Florence current Rome Prize Fellow at the American Academy in Rome Karyn Olivier presents Because Time In This Place Does Not Obey An Order, a series of site specific installations that grapple with the relationship between justice and spirituality. The works engage the history of Le Murate and its transition from a site of spiritual recluse to a carceral space sifting through the continuity and contrast that these histories evoke. Mental health, social critique, isolation, the closeting of history and  the conflation of senses set cloistered gardens in dialogue with the steady words of Martin Luther King Jr. writing from a jail cell and reveal traces of life behind closed doors which claims universal rights. ______________________________________________

Black History Month Florence was founded in 2016 is a cross institutional network for Black cultural production that celebrates the diversity of Afro-descendent Cultures in the context of Italy.  www.blackhistorymonthflorence.com

Wednesday 20 February 18.00 presentation f the Stand Up For Africa project by Paolo Fabiani and Rossella Del Sere, founders. Stand Up For Africa, is an initiative that actively involves local associations and institutions. By focusing on fleeing populations, Stand Up For Africa creates a bridge between local communities and migrants hosted through contemporary art, which plays a fundamental role in encouraging the inclusion and overcoming of prejudices, addressing especially the younger generation .

Saturday 2 March 16:30 Murate ArtLab DuDù Kouate conducts the musical workshop dedicated to children from 8 to 12 years, Linfa Selvatica. Born from the Family of Griot, singers charged with carrying on the stories of their people, Senegal, DuDù Kouate, multi-instrumentalist musician, interprets tradition in a modern and multicultural way. It is a workshop between story and played to explore the stories and sounds of the African continent. The artist guides the children in the construction of musical instruments from recycled objects. A “Griot” will lead children on an imaginary journey across the continent explaining the role of percussion in African daily life and also talking about the use of tools as a vehicle for communication. https://dudukouate.jimdo.com/   BHMF http://www.blackhistorymonthflorence.com/ Complete program: https://www.yumpu.com/en/document/read/62368788/programma-bhmf-2019-program-bhmf-2019   BHMF The project, conceived and realized with the partnership of Le Murate Progetti Arte Contemporanea is made possible by the Fellows’ Project Fund of the American Academy in Rome. This project is made possible by the support of Temple University Rome